Blockchain – Proxy Voting: Made for Each Other

Annual General Meetings are supposed to be an ornament of transparency that is associated with publicly listed companies. Important decisions that influence business and sustainability performance of the company are put to vote in front of all shareholders, irrespective of the number of shares held by them. In most companies, each share accounts for one vote and therefore, the participation of each shareholder can be critical.

Proxy voting has emerged as an important tool for corporations to invite participation of all shareholders, and several traditional and digital channels are being used by companies to facilitate proxy voting. Despite being an important tool for bringing transparency, active ownership and making customer-centric decisions, today’s scenario of the proxy voting process has significant headroom for improvement.

According to Broadridge, 86% of the institutional investors, and 27% of retail investors voted in 1040 annual meetings held between July 1 and December 31, 2017. The poor participation of retail investors in the voting process is a cause for concern because it gives disproportionate power to active investors, which could adversely influence corporate decisions. This becomes an even bigger problem, in small and mid-cap companies where institutional shareholding is low, and low turn-out of retail investors can give disproportionate voting power to promoters of the companies. The current proxy process is also expensive and error-prone as it involves significant manual intervention.

Companies are rapidly moving to digitized proxy-voting and virtual shareholder meetings. However, the processes adopted by each company varies. If the stock-exchange creates a central blockchain based registry of all shareholders of public companies with a provision of proxy voting, it can yield significant benefits in terms of transparency, efficiency, and uniformity. 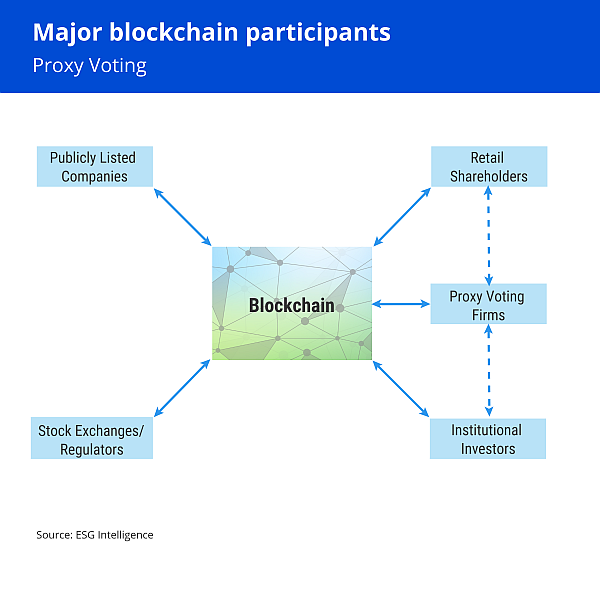 It is heartening to see that several industry stakeholders have initiated blockchain projects to make the proxy voting process more transparent and efficient. Learnings from these projects can pave the way for commercialization and larger adoption of this technology that can truly democratize the way retail investors own public companies.

Here are some examples of how industry is embracing blockchain for proxy voting: